About a year and half ago I responded to a question on ux.stackexchange.com titled "How to improve the smartphone keyboard layout?" with a non-standard answer...

I have recently heard of the new transparent phones. With these new phones, instead of only visualizing a keyboard on the screen and pressing on the equivalent buttons behind the phone, you could display semi-transparent keys above the application and see your fingers below these keys, thus perhaps making the concept easier to learn for beginners, yet still enabling the alternative mode of displaying a miniature keyboard at the bottom of the screen to users that have already got a hand of the (qwerty-like) key placement behind the phone. 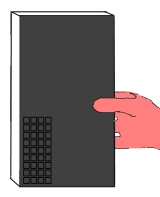 It seems like someone has actual made one of these:
http://edition.cnn.com/2014/01/06/tech/web/ces-unveiled/index.html